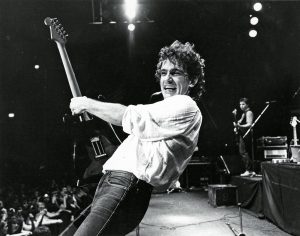 Rebel FM is gearing up for its fourth year of Pub Rock Countdown, airing on January 26th.

Created by the Rebel music team in 2018, the countdown pays homage to 111 Australian and New Zealand songs voted by Rebel FM listeners. Each year the response has been overwhelming, with listeners tuning in from around the country and across the globe.

“Our pub rock countdown on Australia day is just one way we can pay tribute to Australian music and artists,” Rebel FM Network General Manager Cheryl Jowitt said. “Many of today’s emerging Australian music stars were influenced by the big name Australian performers and groups over the past 50 years.

“Getting a start in the music industry is not easy and groups like Cold Chisel, the Divinyls, the Oils and others, got their start by performing in local pubs around the country before hitting the big time.”

Ms Jowitt says Australia is blessed with many talented performers and this countdown not only honours some of the big rock names that got their start in local pubs, but also new artists who are performing in front of live audiences each weekend.

“Prior to Covid, I got the opportunity to watch eight young emerging bands perform on the Gold Coast in front of a small audience and the talent on stage was unbelievable,” she said. “These bands are doing the hard yards, like our Aussie pub rock stalwarts before them, but restrictions now have made the job more difficult.

“At a time with many of our bands, performers, their roadies and support team without work, this year, we want to not only countdown some of Australia’s best rock tracks as voted by our audience, but also raise awareness for the charity Support Act that works behind the scenes helping artists and music workers in crisis.”

Support Act is a unique Australian charity, providing crisis relief to artists, crew and music workers across all genres who are unable to work due to illness, injury, a mental health issue or other crisis, including the impact of COVID-19. You can help by donating at https://supportact.org.au/give-help/