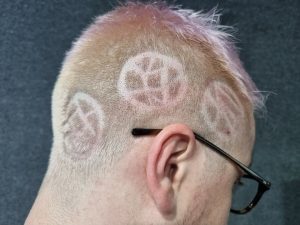 Mr Brooks was able to raise $500 to go towards two charities – the Leukaemia Foundation and the Jack Reed Foundation, who place disadvantaged youths into apprenticeships.

“It started with a general chat on air,” Mr Brooks said. “I was talking about how I had never done anything with my hair, and I was thinking about doing something different.”

That’s when Three Balls Red – a Gold Coast boutique interiors showroom, showcasing a range of lighting and tiles – reached out to Mr Brooks.

“Three Balls reached out after they heard us speak about my hair on air and said they would give us $500 for charity if I got their logo shaved in my hair,” he said. “It wasn’t my favourite haircut I’ve ever had.

“I generally don’t like change, but I’m really glad that some money and awareness was raised for some deserving people.”

With 47 Australians diagnosed with blood cancer every day and that number set to double to close to 100 by 2035, Leukaemia Foundation CEO Chris Tanti thanked Mr Brooks and the team at Three Balls Red for helping keep up the fight against this deadly set of diseases.

“This generous donation will help ensure that the growing number of Australian families facing blood cancer have someone to turn to every step of the way in their journey, a place to call home during treatment, and access to the best possible care, as well as helping brilliant research scientists continue their search for better ways to diagnose and treat blood cancer more effectively.”