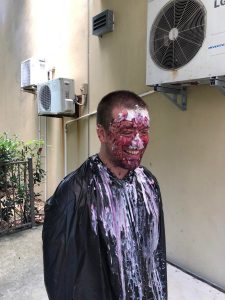 Rebel FM’s Jess and James will be celebrating the lead up to Australia Day with a very Aussie dessert – the Pavlova.

But they won’t be eating it.

From January 20th until Australia Day, Jess and James will be answering Australian-based trivia questions, but the catch is that if they get the answer wrong, they get smashed in the face by a fully-loaded Pavlova.

“Getting smashed in the face by Pavlovas was probably the most delicious punishment I could imagine,” James says.

“Albeit a bit messy and cold! And very Australian!”

James says he and Jess can get very competitive, but Jess managed to take out the overall win in the ‘lightning round’ and James, unfortunately, had to cop a very loaded pavlova to the face.

“I’ve made it pretty clear through my time on the show that I am up for any challenge, but getting smashed in the face with a pavlova wasn’t top of my list,” Jess says.

“Smelling like cream the rest of the day wasn’t too fun, but what was fun was getting a win against James.

The episodes will be airing via Rebel FM’s Facebook page each day until Australia Day.