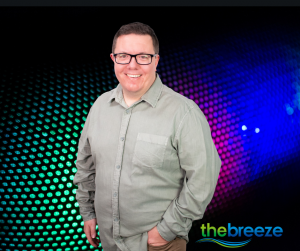 Starting within the radio world in 2006, Chris has dreamt of being on radio since he was five-years-old, and he is thrilled to be driving Breeze listeners home every weekday.

“I ended up making my own radio station at home when I was about five and I used to do a drive show every weekday, and the only ones that listened to it were my mum, who was cooking dinner in the kitchen, the poor neighbours next door, or the people walking past our house,” Chris says.

“I always said I would love to do a breakfast show or drive show, and here I am, 30 years later fulfilling that dream.”

Chris has been working at The Breeze, part of the Rebel Radio Network owned by the Jowitt Family group of companies, since 2013. Network General Manager Cheryl Jowitt says Chris has always delivered nothing but his best for the station.

“Chris lives and breathes radio and from the earliest memories of his radio days as a teenager to now, his dream has always been to host a major shift on a radio station. His perseverance and consummate skill on air, combined with this skill as a personality has made him a star in the eyes of our Breeze family.

“Our audience has grown up with Chris Hull as part of their radio family and now he gets the chance to wrap up the day and drive them home weekdays across The Breeze network of stations in Queensland and New South Wales.”