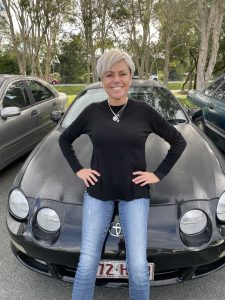 For Rebel FM radio presenter Jodie Shepherd, her 1998 Toyota Celica meant a great deal more to her than just being a mode of transport.

But after many years of service, the Celica needed a new owner, dedicated to restoring the vehicle to its former glory. So, Rebel FM breakfast hosts Jess and James decided to help Jodie on her quest to sell the Celica to a true fan.

“Jodie had been looking at selling her car for some time and we thought by putting it out there to our Rebel listeners, we could find a really good home for it,” Jess said. “And so, ‘Jess and James Sell Jodie’s Car’ was born and it all went from there.”

The team put a call out to Rebel listeners, letting them know they were trying to sell Jodie’s car, posting photos of the car on social media, asking listeners to bid.

“The starting bid was $500 from James, but Jodie wasn’t keen on him having it because she assumed he only had bad intentions,” Jess said.

The car eventually sold to a listener by the name of Mark who had been looking to buy a car for his daughter, as she is due to get her license in about 18 months.

“He was willing to put the work into the car and thought it would be a great investment for his daughter,” Jess said. “He put in a bid for $1,000 and he was our highest bidder.”

“Listeners loved getting involved, whether they were legit bids or not, everyone was happy to have a crack at a bid and a laugh about Jodie’s poor car.”

Jodie says despite her love for the Celica, she was having mechanical issues and needed more money put into the car to restore it then was viable for her to spend.

“If I had the skills to look after her, I would have kept her,” Jodie says.

And, how did she feel when the Celica sold?

“I cried,” she said. “I really did, but I couldn’t ask for a better scenario with the sale.

“It has been bought by someone who is going to do exactly what I would have liked, he’s bringing her back to life for his daughter and it will be her first car.

“I believe she’s a little dubious now but when she sees what that car can be, I think she’ll be very proudly driving it. The new owner has said he will keep me updated with the work. I really couldn’t have asked for a better buyer.”